We are going to start off by presenting a Spoiler Alert.  there is no way we can unpack this movie without presenting some spoilers.  If you have not viewed Godzilla: King of the Monsters yet, we encourage you to do that first before proceeding with this article.  If you have, let us know your thoughts below and see if you agree with our assessment of the new movie.

The film picks up after the events of Godzilla 2014 with a five year run of Monarch collecting information on new titans, while researching Godzilla.  Dr. Emma Russell has finalized a machine named the Orca that allows Monarch to communicate with the Titans once they discover their Alpha frequency.  The action soon escalates as Dr. Russell is captured by a group of Echo-Terrorists with the plan to awaken the Titans in an effort to let them heal the world from the destruction of man.  As it always does, everything goes horribly wrong when it is revealed Dr. Russell is one of the terrorists and she actually releases King Ghidorah from his frozen prison in Antartica.  This unleashes a slew of monsters who wake up because of this Alpha that include Rodan, Mothra, Behemoth (resembling a Woolly Mammoth), Schulla, MUTO, and even Kong being mentioned in the film as a setup for the next Godzilla vs King Kong film in the works. 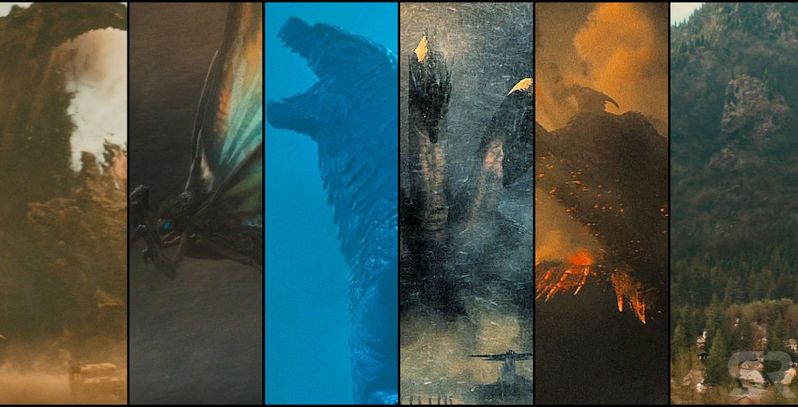 Once the monsters start their destruction it becomes clear to everyone their best hope in stopping Ghidorah is to once again let the monsters fight, and as anyone could predict prior to seeing the movie, of course Godzilla will reign supreme; but how it goes down may be the part that actually surprises you.  There is so much in this movie, we are sure more and more reveals will be coming out of the community of fans who will break this film down to its bare bones, for us we will keep it simple with the parts of the movie we did not like, the parts of the movie that made our Godzilla fandom go to 10 again, and what we hope to see in the future for the franchise.

We will begin with the parts of the movie that did not settle well for us.  This is coming from a group at 812review who are completely sold on the Godzilla monster-verse, and big fans of the preceding history of the character the Toho film created for us.  The first was the language; I know this one may seem like a “come on, don’t be a stick in the mud”, but there are just some moments that are a bit much for younger audience members.  The best part of the Godzilla fandom is bringing the young generation to the franchise and we just thought a few moments could have been toned down without harming the drama of the moment.  This is a lesson we wish Hollywood would embrace, but the trend is to be more in your face with language in films these days and this film capitalizes on some perfect moments that I am sure had some parents saying “DON’T SAY THAT” on the ride home from the theater.

The second problem we had in the movie was what felt as a gloss over on Monarch.  It did not feel as the film had time to really explain how this agency had all this money, and equipment, and power.  To the film it was to simply be understood this was all in order and we just needed to accept it.  In the previous Godzilla movie, this was not well addressed either, but Kong: Skull Island did a much better job addressing who the Monarch group was.  To us this just felt as it was a bit rushed and might have been lost on the audience overall.

Now, onto the good parts; and it may be fair to summarize all the thoughts, feeling, and observations into this statement.  Godzilla: King of the Monsters, presents fan service for the Godzilla faithful, equally as well as Avengers: Infinity War presents fan service to the Marvel faithful.  During the constant cadence of the movie it is easy to miss all the amazing call back moments packed into this film.  It was clear the film’s director Michael Dougherty understands the Godzilla Toho history, and packed it into the movie in every turn.  Here are our top five favorite moments of the film.  Let us know in the comments below if you agree, and what your favorite part of the movie is.

The future of monster movies for the Godzilla lineup may not be known, but we certainly can expect a final film of the series between Godzilla and Kong.  If King of the Monsters is any example of what we can expect, the Godzilla vs King Kong will be an incredible film for us monster verse fans.  We are hopeful to see many movies come out of this run of films, but with licensing and budgeting issues it all remains to be seen.  Either way, King of the Monsters was in many ways the best film we could have hoped for.  Let us at 812review know your thoughts in the comments below.

This site uses Akismet to reduce spam. Learn how your comment data is processed.